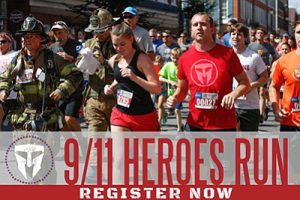 Everyone’s invited to be part of the Annual 9/11 Heroes Run on on September 10, 2017 at the USS Midway Museum. Join us as we commemorate the nearly 3,000 lives lost on 9/11, as well as our veterans, military, and first responders who serve our country and our community. Proceeds from the event will benefit the Travis Manion Foundation. Get also a chance to meet Redmond Ramos from The Amazing Race. See you there!

The 9/11 Heroes Run 5K series was inspired by Marine 1st Lt. Travis Manion, who was killed by a sniper in Iraq in April 2007 as he selflessly protected his battalion. Before his final deployment, Travis visited Rescue One in NYC—famous for losing almost all of their men on 9/11—and returned home with deeper passion about why he was fighting in Iraq.